Even though the iPhone OS is built to make it hard for viruses and malicious apps to successfully launch attacks, users of iPhone can never be certain of 100% safety. And chances are virus and malware programs launched on iPhone devices will be much more advanced and even harder to detect and destroy than on other devices. To that end, if any iPhone user does not want to fall victim of such sufferable attacks, they should ensure they have the best antivirus app for iPhone installed. 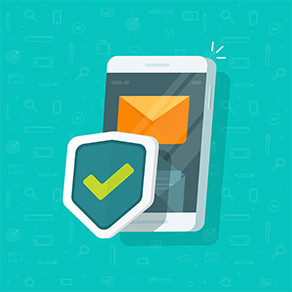 Not only does an antivirus app detect malicious apps and programs, it will successfully get rid of them saving your handset from major malfunctions or even losing your crucial data. A good antivirus app should have regular virus definitions updates, consume little CPU power, able to work seamlessly in the background, be lethal to malicious apps and programs, and be easy to use.

On top of it all, it should be affordable or better yet come as an extension of the antivirus software suite you subscribe to. And what better antivirus app for iPhone users than Comodo Antivirus? Built to seamless work with the iOS, the Comodo Antivirus iPhone app is an extension of their suite of services, offering maximum protection from spyware, virus, adware, rootkits, bots, and all kinds of malwares.

The iPhone 7 is a much more secure gadget than its predecessors, with its iOS system built to restrict apps from reading each other's data. That essentially means that each app installed on the phone has access only to its data and there's no sharing of information between apps. Effectively, this means that viruses are useless when they infect the phone.

However, the scope is changing and viruses can come in any shape, way or form. Could be an email you open, or an advert you clicked. The complex technologies used by cyber attackers now makes even the iPhone 7 vulnerable. It is therefore paramount to have the best antivirus app for iPhone 7 installed. You want to prevent your phone not only from viruses, but also malware, spyware, cookie-trackers, bots, rootkits, and much more. Get Comodo Antivirus if you want complete protection all year round when you have their full suite annual subscription. Better still, we have 100% virus warranty. Protect yourself because prevention is better than cure.

The basic ethos of iPhone is to provide premium products secure from attacks and damage. And while they have done a good job at that, cyber-attacks are getting more complex rendering even the iPhone users vulnerable. Having the best antivirus app for iPhone 8 installed is your best chance for security. And there's only one that does this so well without charging exorbitant rates. Comodo Antivirus.

The prima facie of iPhone X is that it's indomitable to cyber-attacks, malware infections or even spyware and adware. Unbeknownst to many is that nothing in the online world is too secure, and loopholes will always be there. To that end, the assumption that your iPhone X is immune to viruses and malware holds no basis and you're doing yourself a disservice by not having the best antivirus app for iPhone X.

The iPhone X, like any other device, deserves extra layers of protection. Cyber-attacks are becoming increasingly complex and you need an advanced antivirus app that can deal with such attacks in real time. Such an app must be regularly updated and offer quality human analysis in real time 100% of the time. Even more so is the use of auto-containment for when a malicious program is detected but not verified. And Comodo Antivirus offers all these and much more. You'd be missing a lot to not try this antivirus app for iPhones.

Certified as one of the best antivirus software based on its usability and protection by the AV-TEST 2019, Comodo Antivirus is arguably one of the best antivirus apps for iPhone users. And with relatively cheap rates, it has brought virus and malware protection closer to every computer user regardless of their device. For only $29.99, you can have their full suite of protection 100% of the time with 100% virus warranty for both computers and iPhones. Don’t be a victim of cyber-attacks. Take charge before it's too late. Subscribe now!