Cybercriminals are constantly coming up with new methods on how to secretly access your PC and other internet enabled devices like mobile phones and tablets. For this reason, online software security companies are also looking for ways to enhance and update their antivirus software packages to protect against malwares, phishing scams, ransomware, and all other types of viruses. 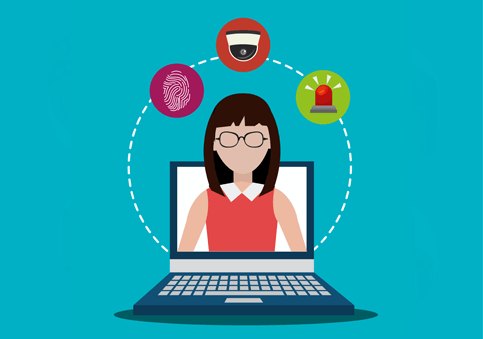 Comodo Internet Security uses heuristic detection and containment to easily spot unknown malwares that could compromise your computer. Heuristic detection is the process of analyzing the code of a file to check if it contains a code commonly found in malware. If a suspicious code is detected, the software deletes the file or recommends it for containment. Suspicious files are placed in a sandbox environment to isolate it from your operating system, keeping your legitimate files unharmed.

Comodo also lets you shop and bank online with confidence, preventing your data from getting hacked, tracked, or viewed by malware or internet thieves.

Bitdefender has a minimalist, easy-to-navigate interface. The program does not require any configurations, allowing you to automatically scan your device in the background using cloud-based detection. It also performs a deeper scan once it detects any malicious software or red flags.

Bitdefender’s real-time virus shield can halt malicious URLs and uses behavior-based detection to protect your machine against cyber threats. If you are worried about having your identity stolen, new features such as anti-fraud and anti-phishing tools use more advanced filters to veer you away from any dubious sites. Apart from its superb malware blocking and removal, this lightweight program also works as an excellent anti-rootkit utility.

The third software in this best free antivirus review is Avast. With commendable basic protection, it is one of the popular security suites today. It is packed with impressive features such as anti-malware, anti-rootkit, and anti-spyware capabilities. The software also comes with a number of customizable options that users can modify during installation, including protection for Android devices through Avast Mobile Security & Antivirus.

Avast works by initiating scans before unknown files are opened. This way, potential malware attacks are prevented. This antivirus software is great for people who like to browse online as it can block malicious URLs and stop auto-downloads from occurring. It also analyzes the behavior of specific apps to see whether they are up to something suspicious.

Since this is only a free version, you won’t be able to take advantage of other features which are exclusive to the premium package, including auto-scans and auto-updates. If you want to avail them, you need to subscribe to a plan, which costs from $60 to $120 a year. Nevertheless, having a free version will keep you well protected than nothing.

Our last free antivirus software on the list is Malwarebytes. It is a comprehensive virus-removal software that is often chosen by individual users and organizations. Malwarebytes has malware protection that detects and removes malware with automatic scans. It also has anti-ransomware feature that guard files from ransomware attacks. Meanwhile, its anti-exploit option defends users against any known vulnerabilities discovered in your system or apps, while its malicious website protection ability prevents you from accessing fake or malicious sites.

In addition to its robust anti-malware scanning functions, Malwarebytes employs Chameleon technology that enables you to install and run the antivirus software even when malicious programs actively try to block its activation on an infected system.

In addition to its robust anti-malware scanning functions, Malwarebytes employs Chameleon technology that enables you to install and run the antivirus software even when malicious programs actively try to block its activation on an infected system. The only downside of Malwarebytes’ free version is it focuses more on the remediation rather than being a live, protective shield. The scanning tool can only find the malware once you’re already infected by it. Because of that, you need to purchase its premium version or one of the other tools on this list. Nonetheless, Malwarebytes is still a good secondary layer of defense.

After checking out this best free antivirus review, make sure to download and install a reliable security software in your machine right away. Do not forget to put Comodo Internet Security on top of your list if you want to protect yourself from the worst threats without breaking the bank.