What is a Malware Attack?

Malware is derived from the terms malicious software.Hackers develop malicious software to infect and gain access to the victim computer without the user’s consent. There are different types of malware they are spyware, ransomware, viruses, adware, worms, Trojan horses, or any other kind of malware program that can get into the system.

Typically, a program is called malware depending on the intention of the developer and not on the actual features. Originally, malware was developed just to prank the end user, however it eventually evolved with more and advanced technology implementation to target victim machines and gain monetary benefits. The objective of any hacker through malware infection is to steal confidential information, or encrypt files and demand money to unlock files

There are different factors that attract hackers to launch malware infection on any target system. Some have vulnerability n the OS, giving too many permissions to access and there are many factors to it. 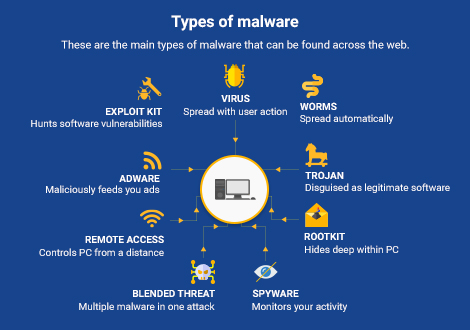 There are variety of malware attacks. Following are the common types of malware

There are variety of malware attacks. Following are the common types of malware

Adware is nothing but a software that is used for advertising. It is created to deliver advertisements instantly. Most of the common instances of adware are through pop ups on websites and ads that are shown by the software. Most of the free software versions are loaded with adware. Most of the adwares serve as revenue generating tool.

Bots are a type of malware that are destined to perform a set of functions. Though it was created for harmless purposes, it is evolved to become malicious. They are used in botnets to perform Ddos attacks as web spiders that can extract the server data, it is also developed to distribute malware that are masked as frequent search items on download sites.

Ransomware is a type of malware that helps malware authors to encrypt or lock the computer files while demanding a ransom to unlock the encrypted files. The user is denied access to the files - this is done by encrypting files on the hard drive or displaying messages by locking the system which forces the user to pay the malware author to unencrypt and get back access to their computer.

A rootkit is a type of malicious software developed to access a computer without the users’ knowledge and by escaping detection by security programs. Malware authors install rootkits on the target system and once successfully installed – the hackers can execute files from remote, alter any configuration from remote.

Spyware is a kind of malware that is developed by hackers for spying activity without the users’ consent. These spying functionalities includes gathering keystrokes, activity monitoring, harvesting of data and altering security settings.

This is mostly called Trojan, It is a type of malware that deceives the user by disguising itself as a genuine file to convince them into installing the malware. It can establish remote access to the infected computer to steal data or install any malicious software to track the information and user activity and alter files

A virus is the most common type of malware that can create copies of itself and spreads the infection to other computers.

Comodo offers antivirus software with future-proof and scalable security features and stands the best antivirus software in the IT industry thus far. It delivers 360-degree protection to the system from adware, rootkits, ransomware, viruses, rootkits, backdoors and from any other malware infections.

Some of the prime features include: