Malware refers to malicious software that infects an entire organization’s network or individual computers. A malware infiltration can be disastrous and some of the consequences include extortion, data theft or the crippling of network systems.

A malware scanner is considered to be an essential part of your security posture for discovery in order to successfully detect malicious code and stay protected from online threats. Websites have become extremely vulnerable to malware attacks because of millions of new malware strains detected every day. Hence, using a malware scanner will help users and website owners to detect threats at an early stage and even prevent them. Websites should thus implement a malware scanner into its security in order to effortlessly spot the most dangerous vulnerabilities. This will reduce the risk of hackers finding your website and attacking it. 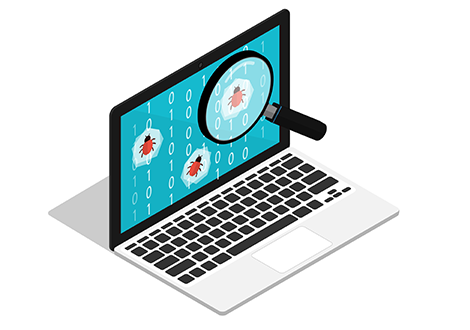 How do I check for malware?

Generally, certain signs and symptoms indicate a potential malware-infested in a PC. The computer or network run slower-than-usual, the frequent occurrence of lots of pop-ups, and other mysterious activities that are totally new. It’s possible your system has been infected by a nefarious entity, at times—even when the latest antivirus program is installed. Even before you get to the bottom of the issue, here are a few things that you need to adhere to. They are Enter Safe Mode, Delete temporary files, Download malware scanners, and lastly, run a scan with Comodo Malware detection software.

How do I scan and remove malware?

You can scan and remove malware by adopting the following measures:

Originally, antivirus software was designed to offer protection against computer viruses. This software started to provide protection from other computer threats such as Trojans, rootkits, backdoors, keyloggers, phishing attacks or botnets. A good antivirus program can detect malware if it has the following features:

How do you detect malware?

The following symptoms will help in detecting that your computer is infected with malware:

What does malware do to your computer?

Malware includes all types of software developed with aim of causing harm. Malware can infect a computer in several different ways and can bring about a variety of effects. Protecting your computer from malware is possible if you have a good malware scanner. Becoming aware of these possible effects can help you recognize when your computer is infected and give you a better understanding of why it is extremely important to ensure that your computer is protected.

The most obvious symptom of a malware infection is that the computer becomes unstable. The computer could reboot spontaneously, crash or slow down without any logical reason. When a worm infects a computer, it is possible for the Internet connection to become slow as the worm searches online for other computers to infect. The most dangerous symptoms of malware are mostly the ones that you do not see. Malware can be designed to record the keys that you press on your keyboard, for instance, developing a text log that your computer sends to a hacker periodically. Hackers then scan the text log, looking for passwords that they can use to access your bank or email accounts

Even though malware attacks continue to grow and put a user’s online privacy at risk, antivirus programs are still considered to be a vital tool to help keep the cyber criminals out of your PC and other devices. They are essential because they can offer security protection. Antimalware will provide your antivirus a boost and improve protection for your devices. You will thus need them both to keep you safe from malware and viruses, and strongly reduce your chances of getting hacked.