A strong antivirus program is essential for Windows PC users in order to ward off malware attacks, safeguard their personal information and online identities, and to enable efficient running of their computers. Antivirus software is thus a vital tool that helps prevent Trojan horses, worms, viruses, and several other cyberattacks.

Is Antivirus Software Essential for Windows?

Yes, it is essential for all devices running on Windows operating systems. If your windows workstation does not have an antivirus software, it will then become vulnerable to ransomware, Trojans, worms, spyware, rootkits, and viruses. 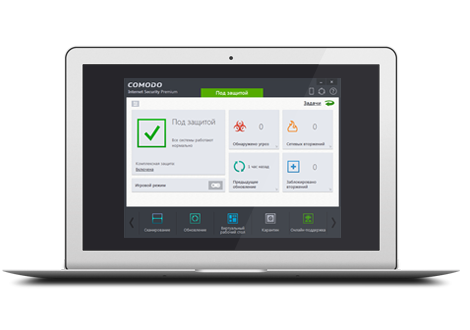 Even though every single intrusion into a computer may not cause damage and steal vital data, yet this does not mean that the attack is not dangerous. All intrusions experienced by a computer exploit a weakness or vulnerability in the computer’s operating system or other software capable of functioning as an access point to an attack. After an absolutely harmless intrusion exploits a vulnerability, it usually transmits a signal to others highlighting that this particular computer has been infiltrated. This results in making room for more dreadful attacks. Taking all this into consideration, you can help keep your computer healthy by installing free antivirus software offered by Comodo. Comodo offers antivirus for:

Here, we shall focus on Comodo's antivirus software for windows 7 and its key features that will help protect your Windows 7 OS and prevent security problems. This free antivirus package offers advanced security traits capable of even detecting zero day threats. It exploits the use of a number of techniques to quarantine and clean unknown files from shared disks, emails, downloads and system memory through the following key features:

This unique security feature allows you to instantly run unknown suspicious applications or files in an entirely quarantined environment. Applications and programs that are run within the sandbox are prevented from accessing the normal files and several other functions of the system, thus causing no risk to the system or any of the other files and applications.

These key features of Comodo Antivirus take the outer most layer of the protection mechanism. These features highlight that Comodo Antivirus works best with heuristics scanning functionality to identify unknown Trojans and viruses. Comodo Firewall Pro has succeeded in enhancing the next evolution in computer security with Default Deny Protection (DDP).

A number of security programs maintain a list of known malware. This list is used to decide which files and applications are not supposed to access a PC. The problem here is quite obvious. What if the list of malware is not found some entries, or not even updated?

DDP helps in fixing this problem by guaranteeing complete security. The firewall references a list of more than two million known PC-friendly applications. If a file not mentioned in this safe-list attempts to enter your PC, the Firewall instantly alerts you to the possibility of attacking malware. All this take place prior to the malware infecting your computer. It's prevention-based security is considered to be the only way that will help keep PCs completely safe.

This system focuses on obstructing malware by observing and examining the behavior of the unknown application code. It is an enhanced security technique that has been designed to efficiently detect and prevent malicious network intrusions. Generally, this system is responsible for monitoring a network’s entire traffic and dynamically preventing threats which can frequently be missed by the conventional firewall and antivirus solutions.

This key feature help in continuously scanning every single file that has been accessed including the system memory. If the scan identifies any threats, this is then followed by the antivirus prompting the user on the malware detection and blocking the malware interference.

The antivirus for Windows 7 integrates On-Demand scanning onto the Windows operating system. Users will have to right click on a folder or file and select Scan with Comodo AntiVirus from the menu. A built-in scan scheduler helps you to manually schedule scans in regular intervals based on the users' requirements.

Comodo Antivirus for Windows 7, available with the above mentioned cutting-edge technologies, guarantees to offer your Windows 7 powerful protection against various security threats. You can thus use this best free antivirus software for windows 7 without the need for Microsoft's assistance and without even upgrading to Windows 10. Just buy Comodo Windows 7 Antivirus and experience how this security software protects your PC.